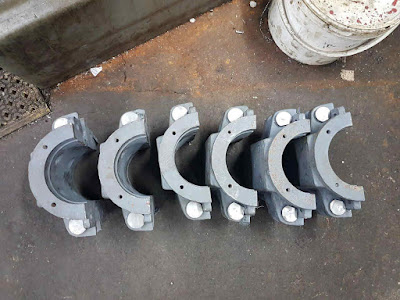 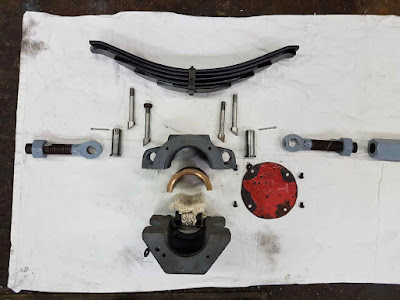 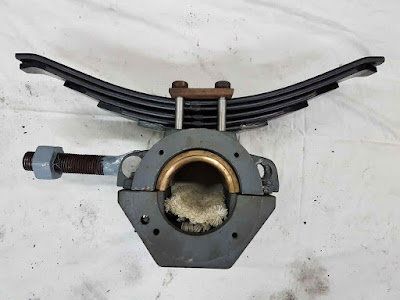 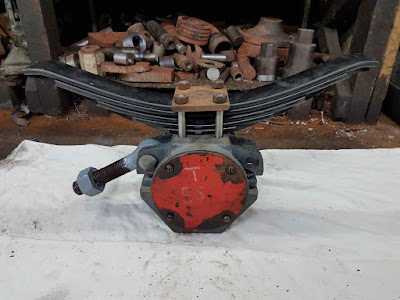 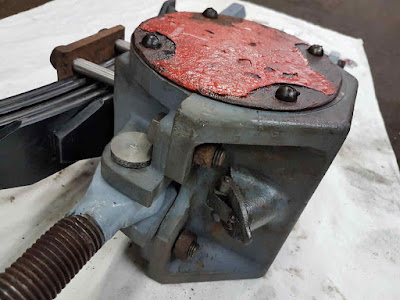 After all that excitement normal business has been resumed. Having completed the repairs to the main frames, the subframe channels required some attention. The left hand (‘clock side’ to Boston Lodge habituees) had some pitting which Rob Bishop made good by building up the wasted section with weld, the high spots of which were then milled off to return it to its original profile:

The right hand (‘engine’ side) frame required more attention, as some of the channel flanges were heavily wasted. The solution for this member was to cut out the bad areas and replace them with new, welded in sections:


One of Rick's little side projects is producing some vintage style chopper couplings (see 13/2/2016 report). These combine old ‘split face’ choppers, with new hooks and eccentrics and recovered bob weights. Coupling to slate wagons will use the ‘twisted 8’ link in the rear coupling hole, secured with a French pin:

One of the technical challenges facing the project is the wheelsets. The tyres have a lot of life in them, but they are gauged for a 2’ gauge railway, rather than the 1’ 11 ½” of the F&WHR. Will High has been working with Paul Molyneux Berry & Jon Whalley to establish a wheel profile that can be turned on to the original tyres which will allow the loco to run on railways of both gauges. Re-use of the tyres addresses both conservation and budgetary targets. A profile has been agreed and templates laser cut. The wheels are now waiting for the attention of the Boston Lodge wheel lathe.


Once the wheels have been turned, all of the heavy downstairs work will be complete. The brake gear still needs sorting out, together with the transmission chains and drag boxes to suit the new couplings, but the end of the initial phase of the project is now in sight.

Report by  Dave High. Photos and all the hard work by Dave Linton

The KS4415 project is full of contrasts: after the last report of heat, team work & big hammers, now a report on one person working carefully & precisely.

Each axlebox has 4 bolts which connect the upper (keep) part of the axlebox to the springs. Of the 24 bolts, 6 were considered unfit for re-use. Dave Linton has manufactured 7 new ones: 6 for fitting, one ‘just in case’. The drawing below shows the various components. Dave had previously made the spring clamp plates.

Last month's brief diversion into the 21st Century and MIG welding has passed. The March working party has returned to the solid, good old-fashioned values of 1927. Away with your new-fangled welding, bring on the hot riveting! 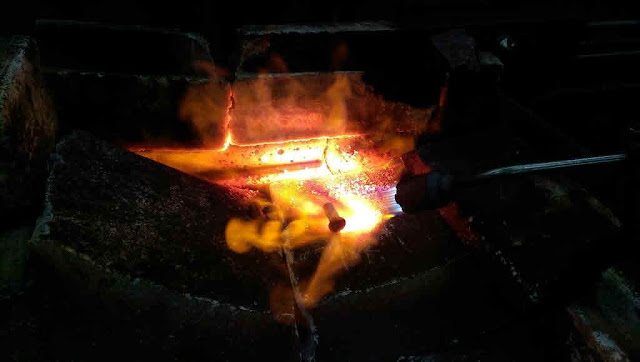 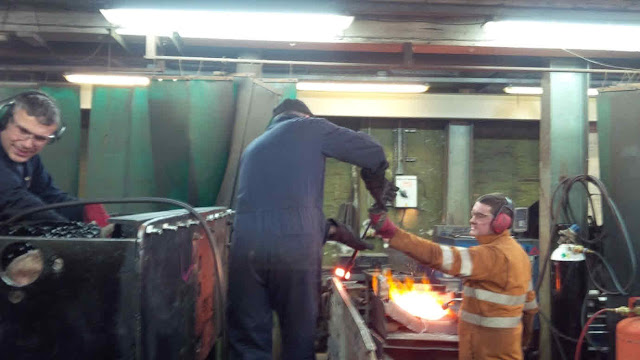 Job No 1 saw the replacement angle bracket fitted. The notch out in the bracket is to clear the gearbox when the frames are the right way up; they are still upside down at the moment. 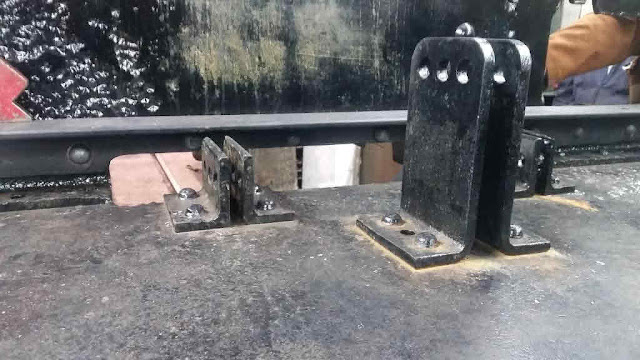 The saga of the drivers’ side rear frame repair has also reached its conclusion. 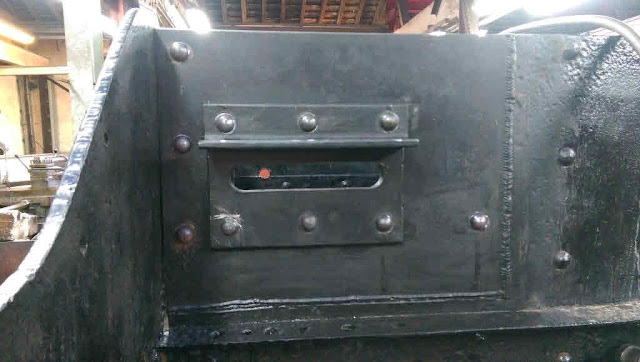 Also at the cab end of the loco are a number of brackets supporting the step ‘pockets’ below the footplate. Several where very badly wasted and have been replaced. Matty Wolstenholme gets up close & personal with some hot stuff. 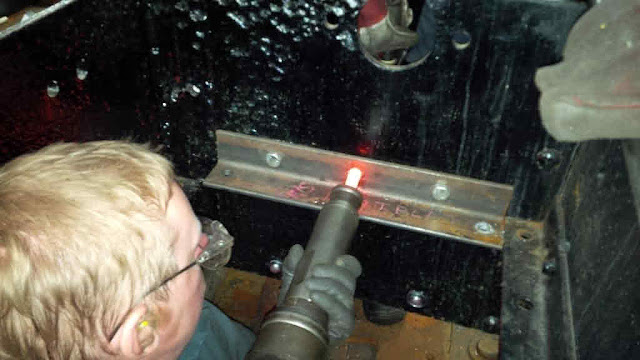 We managed to get the floor plates riveted in. The angle brackets in the photo below are original. It is strange how some of these brackets where fine and others completely corroded away. 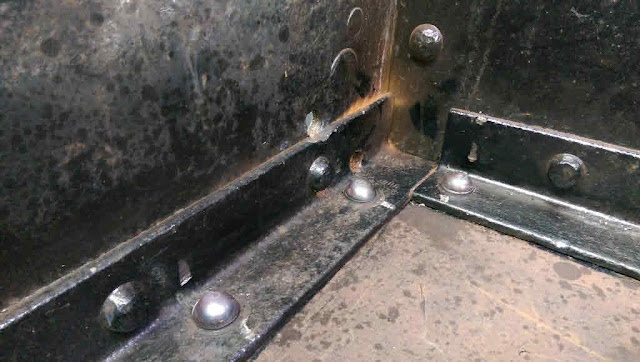 We even managed to fit the angle iron stiffeners to the bottom of the buffer beams. All of the heavy work on the main frames is now complete, but we still need to replace some rotten steel on the sub frames. The drawing below records progress to date. The red bits have been restored and the blue bits replaced. The pink sub frames are the next area of work, together with turning the wheels. Dave Linton is making steady progress manufacturing replacement bolts and pins and we have received quotes for some new drive chains. 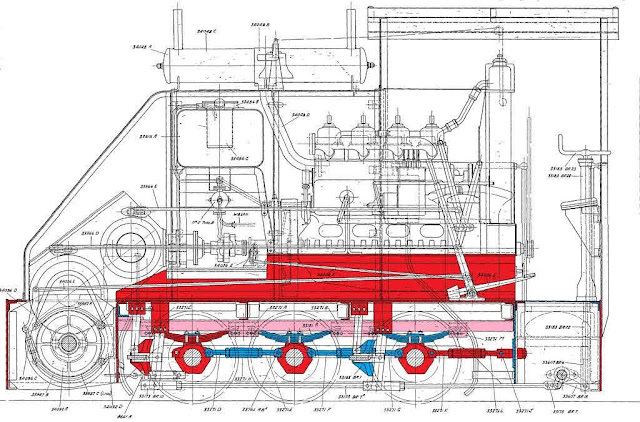 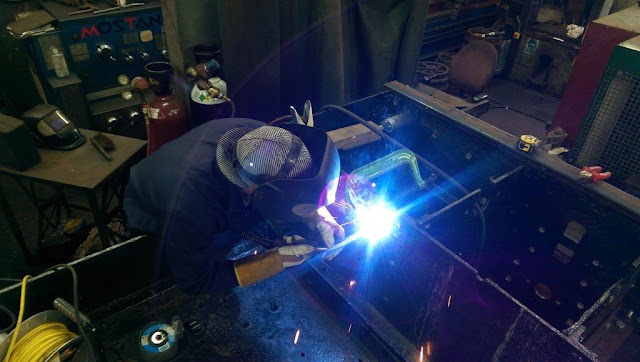 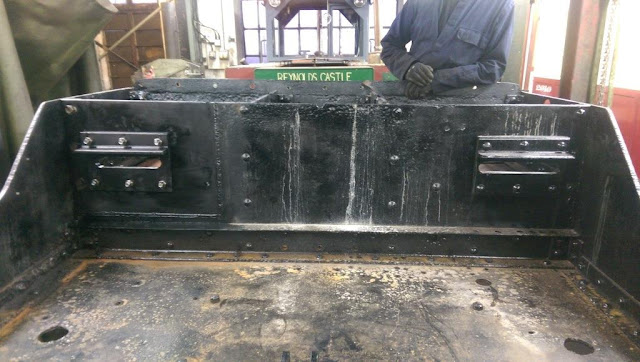 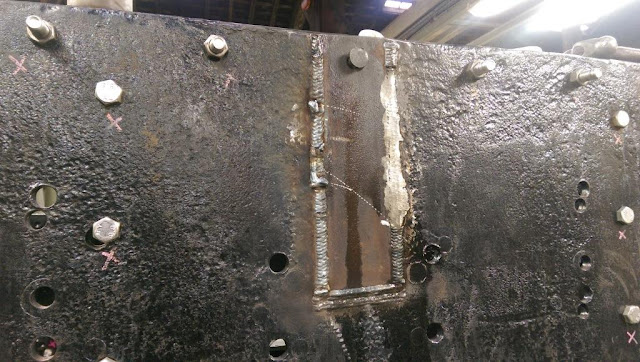 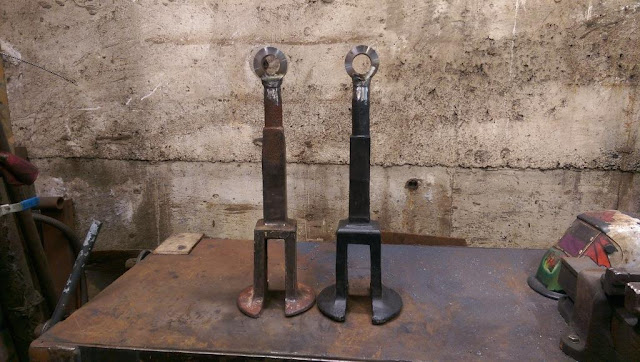 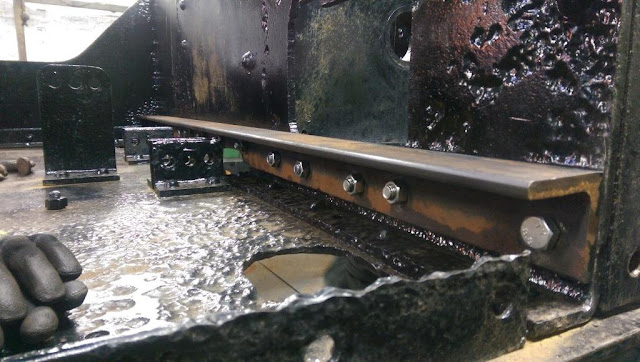 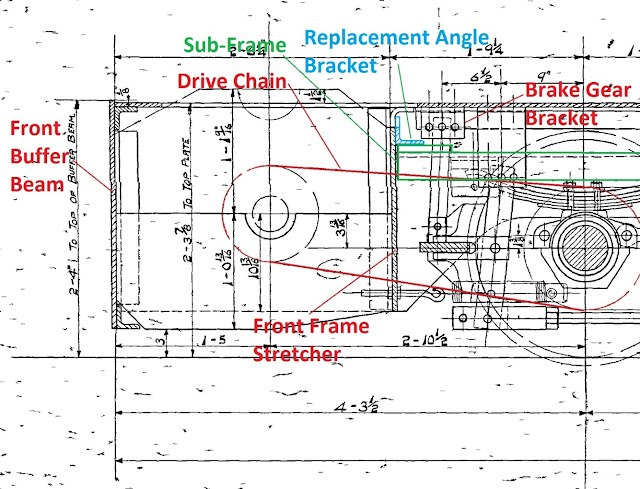 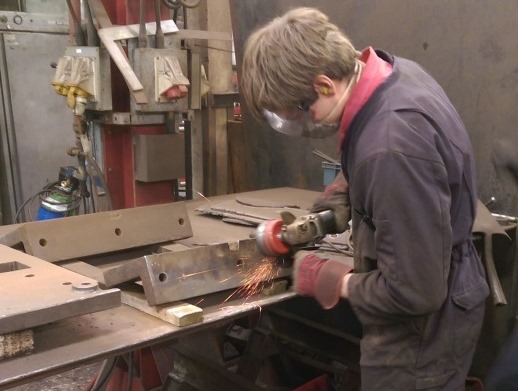 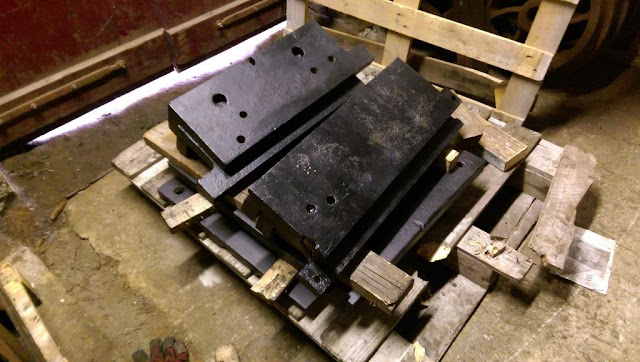