This is the story of the gearbox so far; it is like the rest of the project a mix of good and bad news. 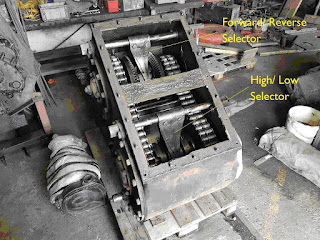 45 years after it was taken out of use the interior of the gearbox is a beautiful thing, and once the bell cranks which operate the selector have been freed off, it performs beautifully.

How it works is very simple. It is a two speed box, with both speeds being available in forwards & reverse. The drive from the engine comes in on a bevel gear behind the forward/reverse selector. This meshes with one of the two bevel gears on the upper shaft. The upper shaft is splined, so depending on which direction is selected the upper shaft rotates either clockwise or anticlockwise.
Also on the upper shaft are two chain wheels. The larger one on the left in the photo is for top gear, while the smaller wheel on the right is the low speed gear. Both wheels & chains are rotated by the upper shaft.
The lower chain wheels are mounted on roller bearings which rotate around the lower shaft. The central section of the shaft is splined, and drives a small external pinion which engages with the large gear wheel on the lay shaft.
The drive from the high/low chain wheels to the splined shaft is via dog clutches, operated by the high/low selector. 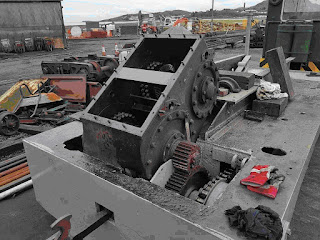 The photo below shows the high ratio gear, with the chain removed. The dog clutch is engaged and the chain wheel is driving the output shaft. The use of a dog clutch to change speed on the move is very crude and it accounts for a lot of the problems which exist and also places some of the historic stories into context. In a wonderful first-hand account published in FRM26 Bill Willans, who accompanied the loco on a lot of the trials states ‘On one occasion we broke some slates; she took a little care to start a train gently. On another occasion a drawbar was broken…’

It is easy to see why such things may occur. There are 2 ways to get a dog clutch to engage while the loco is moving; you can either be brutal or gentle. If you are brutal it may cause a snatch, if you are gentle the train can lose momentum, the couplings on a loose coupled train relax and when you let the clutch out, you can cause a snatch, particularly if the train has lost a lot of speed. It a nutshell it is never going to be good. 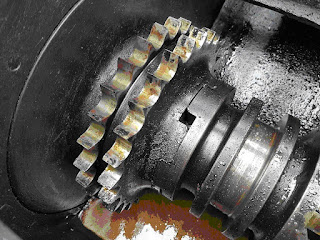 One of Bill Willans' other little snippets suggests that the brutal gear change was the order of the day. He recalls a failure when the loco was running on the FR, ‘the bell crank that operated the first gear fractured. The Glaslyn Foundry forged a replacement and a beautiful job they made of it’. To engage that gear, there must be a need to use quite a bit of force! 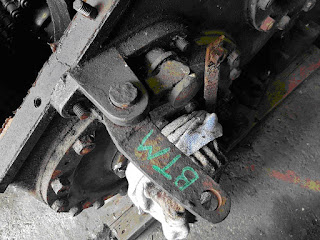 This is the bell crank for the high/ low gear selector. It is the component replaced by Glaslyn Foundry. Is this ‘the beautiful job’ or did it need replacing on a regular basis throughout its career?

The rather harsh gear change also accounts for the damage to the saddles which mount the gearbox on the lay shaft; when you engage gear, the forces on the pinion drive to the layshaft will place the saddles in tension. As these are part of a casting and cast iron does not behave well under tension, these forces have resulted in failure. The photo below shows the saddle in situ on the lay shaft, with the missing chunk being all too evident. 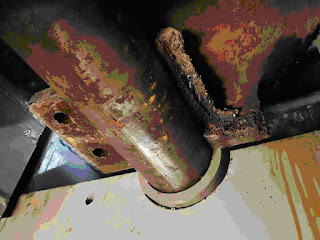 The gear box has been temporarily placed back in the frames to enable the team to measure up clearances and devise a solution. The previous repair option, brazing the saddle back on has been discounted, and we have reservations about a cast iron welding repair as the shock loadings which have caused the damage will reoccur once the loco is running again.
When we took the loco to pieces, the function of a couple of short little stays between the gearbox and the loco frames where not apparent. Their role became all too apparent in the trial run; these stays are an attempt to increase the degree of security between the gearbox and the frames. One of the stays can be seen on the gear box to the right side of the pinion. 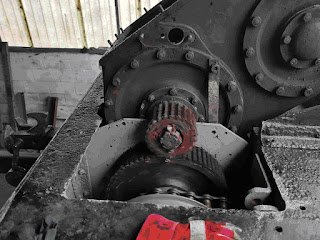 Current thoughts on a repair are to form two large brackets which pick up from the annular row of bolts on the gear box end cover and to bolt these brackets to the frame stretchers.