Pipe Up at the Back

The vacuum brake gear was fitted to KS4415 in February 1929. They produced six drawings to show how to make this modification, and the August 18 blog describes how some of this information has been used to make the vacuum pump. Even the pipe clips and timber packers are detailed on an individual basis.

This is the process followed for one of the clips: 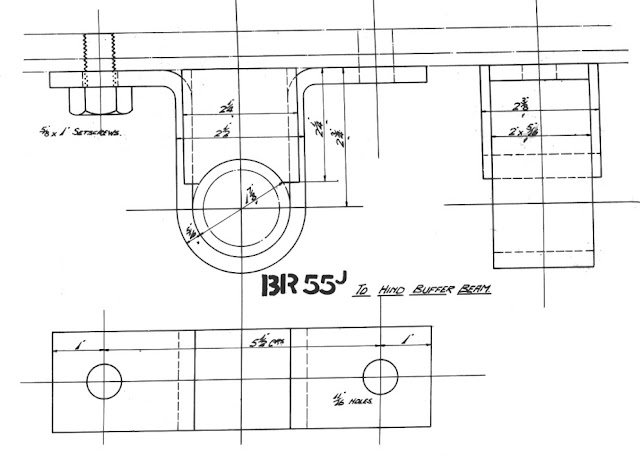 First, formed up on a jig: 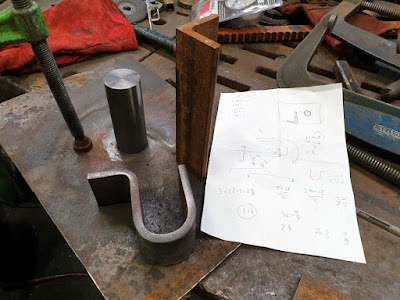 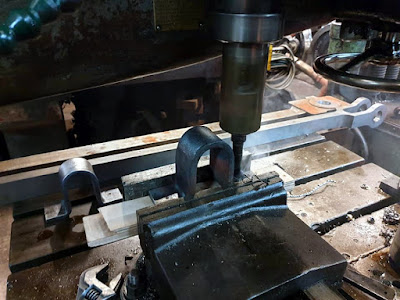 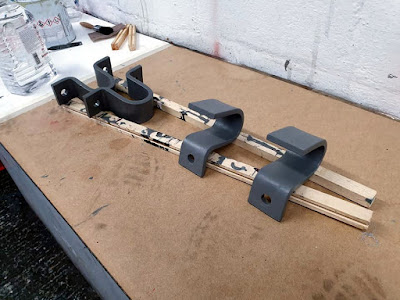 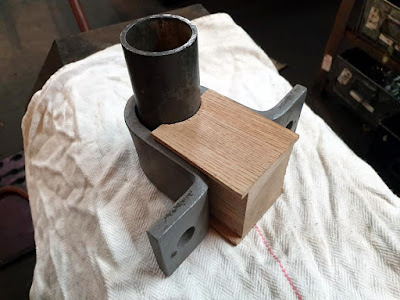 And finally fitted to the hind buffer beam: 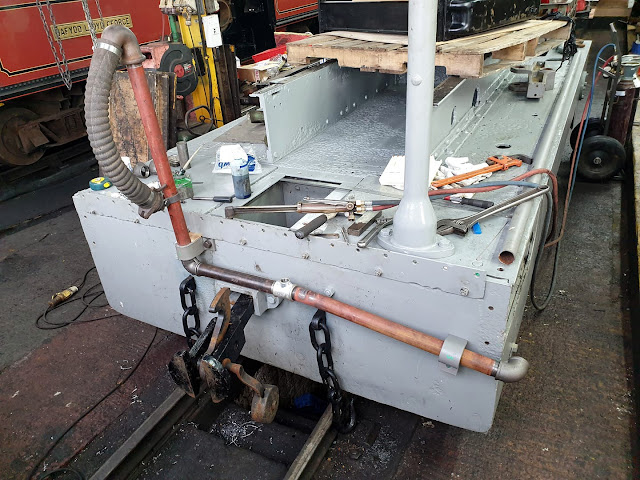 Off to the Foundry

Preparing drawings and planning for patterns is all well and good and requires both time and skill, but we need to draw a line in the sand somewhere, or at least make a mark in the sand and start pouring molten metal. The first three patterns have now been dispatched to the foundry.
These are -

For the rocker covers: 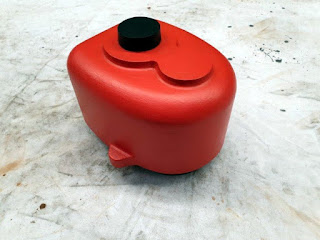 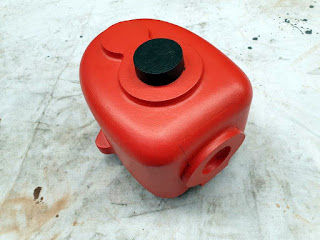 For the radiator header ‘nameplate’ (which is to be cast off this original):

And for a McLaren-Benz plate to fit to the engine block. The photo below shows the pattern in production, based on a rubbing taken from the Armley Mills MDB4: 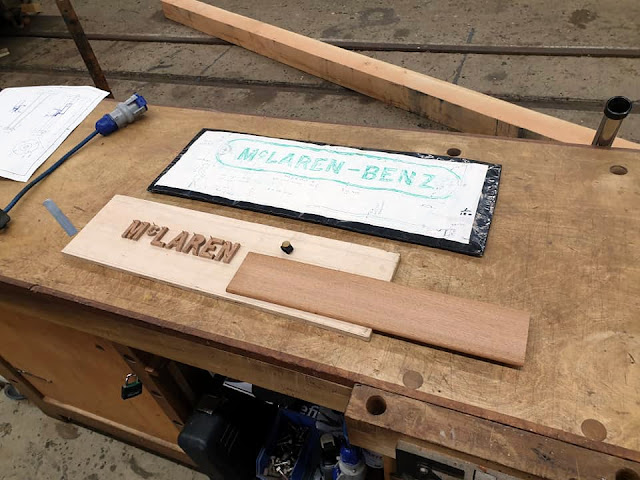 We need four rocker covers and one off of each of the plates. If your man-cave needs retro-Diesel memorabilia then get in touch, we’re having a couple of spares cast.


A bit more on the fuel pump & governor & the timing gear train which drives them.

The image below is of the timing gear cover, with the fuel pump wheel in situ: 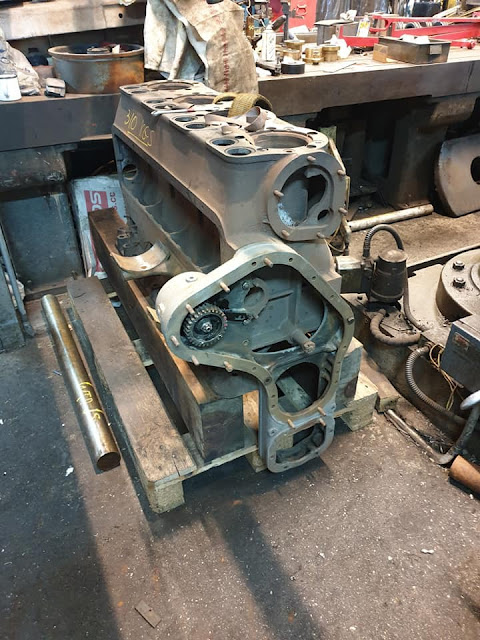 The drive from the back of this wheel to the governor is a simple fork. The bracket which carried the fuel pump/ governor body has also been fitted in this photo so we can check some dimensions: 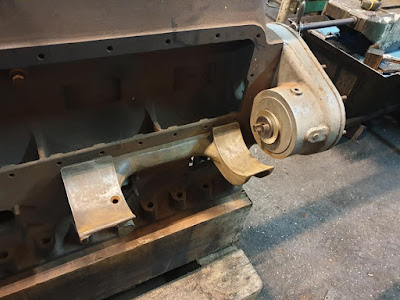 This is the drawing Will High is preparing of the casting which will sit on these brackets: 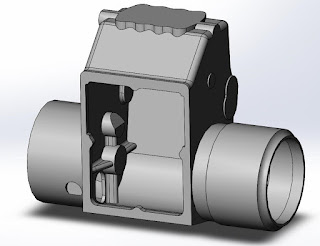 Some of the information used in the drawing has been taken from the MDB2 fuel pump body (below) and we have also measured up some components on the pump on the MDB4 owned by Armley Mills: 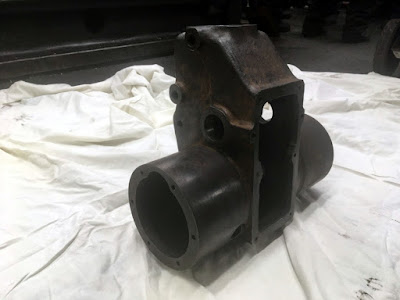 Progress on drawing up the cam followers for the fuel pumps.

McLaren call these ‘Kicker for Fuel Pump Plunger’ and they are components 569 & 570 in the ‘I-Spy fuel pumps’ diagram in the last blog. We of course need four, the two in the photo being from the MDB2: 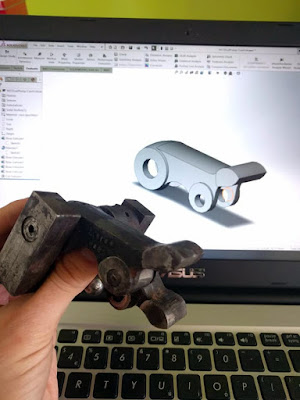 This drawing shows a cam and kicker together with the fuel pump plunger in place in the casting. The kickers on the MDB4 pump we are replicating are carried on a radius arm (allowing the travel of the kicker & pump to be increased) rather than the slide arrangement in the MDB2 shown in the photos in the previous blog entry: 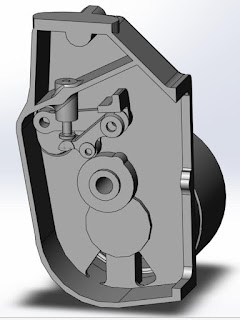 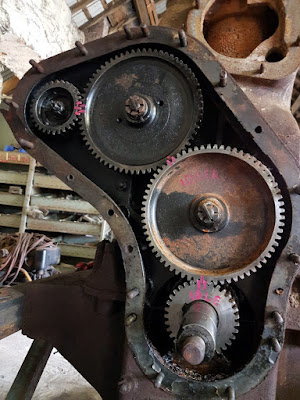 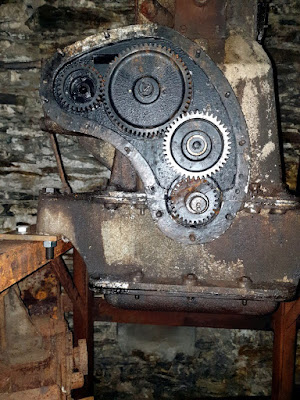 The thing which is particularly exercising our minds currently is the fuel & pump & governor; components which are missing from the MDB4 for which we have no drawings and one of the driving forces behind the loan of the roller from Armley Mills (blog 25 May 2019). There are a lot of bits which make up this sub-assembly, as shown in this diagram from the spare parts catalogue for MBD2 engines. We need to make all these components, large & small, simple and complex: 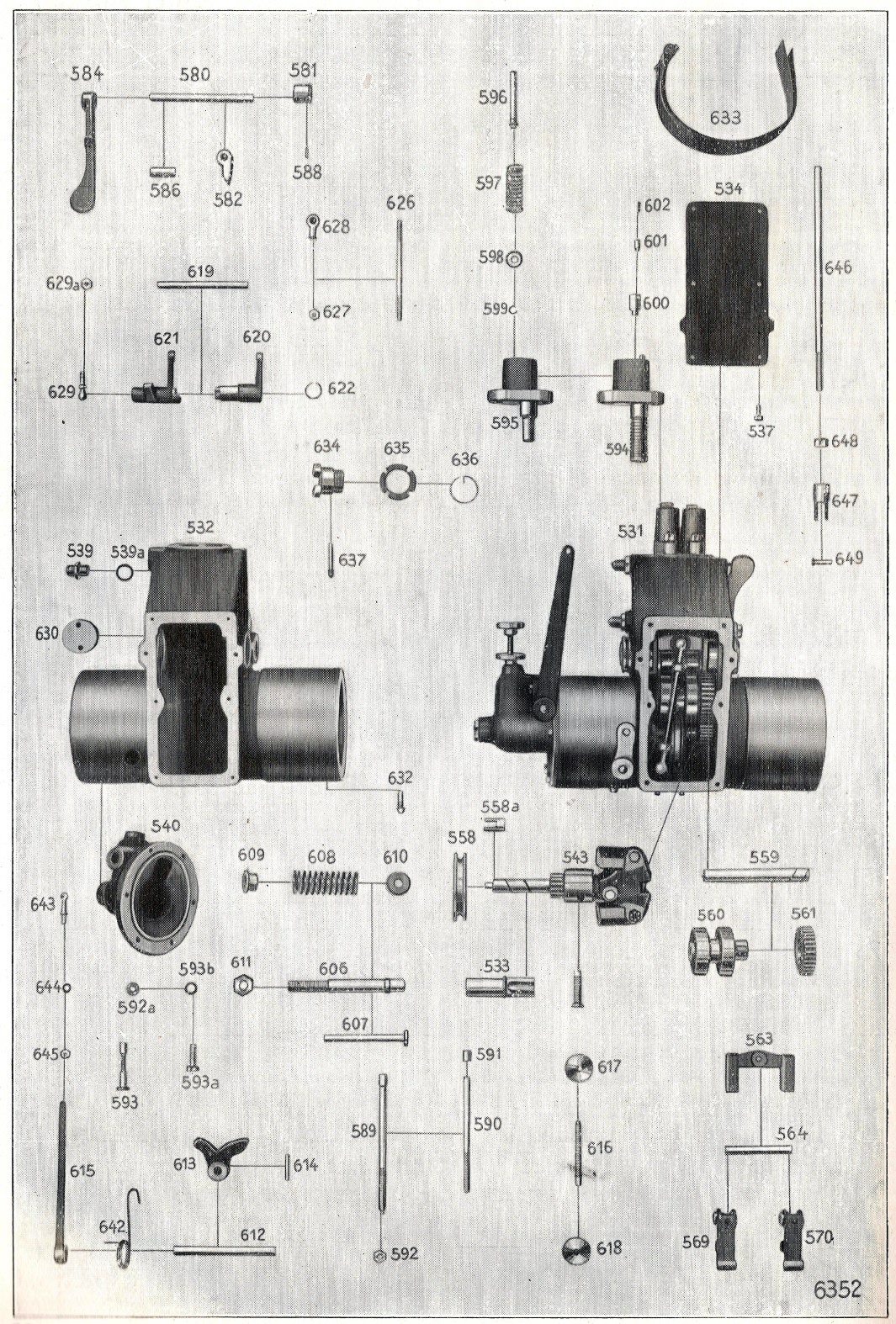 Having removed the pump body from the MDB2 and stripped it down into its components we could spend a happy hour with an old sheet re-creating the image above. With only twenty minutes and a towel you get some of the picture: 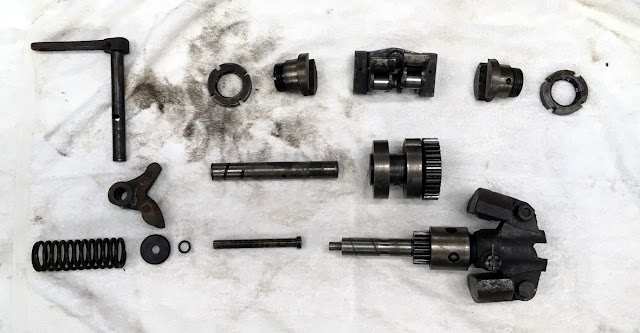 Obviously the focus is not on creating the Dorling Kindersley book of the MDB engine, but understanding how it worked and how we can clone these components. The view below shows the governor, fuel pump cams and cam follower’s sub-assembly: 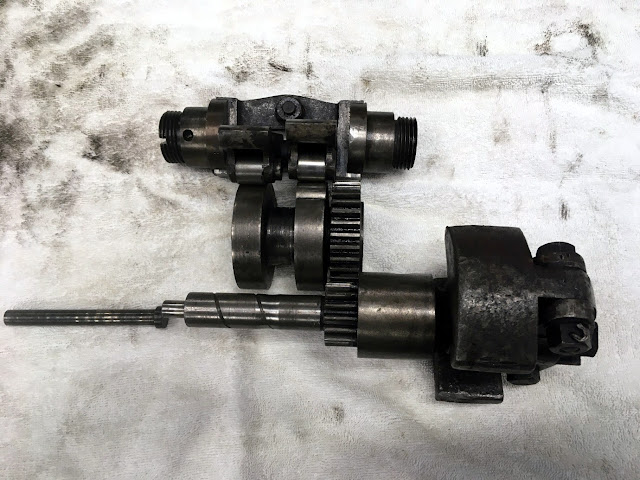 The cams are rather crude. Their carrier can slide up and down in two guides to adjust the stroke (& volume of fuel injected): 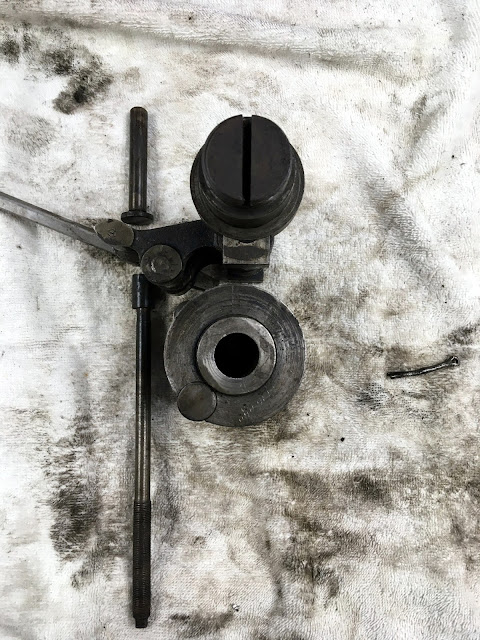 The mechanism to adjust the stroke is controlled in the left hand side of the body by the throttle &/or the spring which resists the forces from the governor centrifuge (which are transmitted down the centre of the shaft carrying the governor). Not rocket science but difficult to explain succinctly. This movement is transferred to the carrier via a push rod with ball jointed ends: 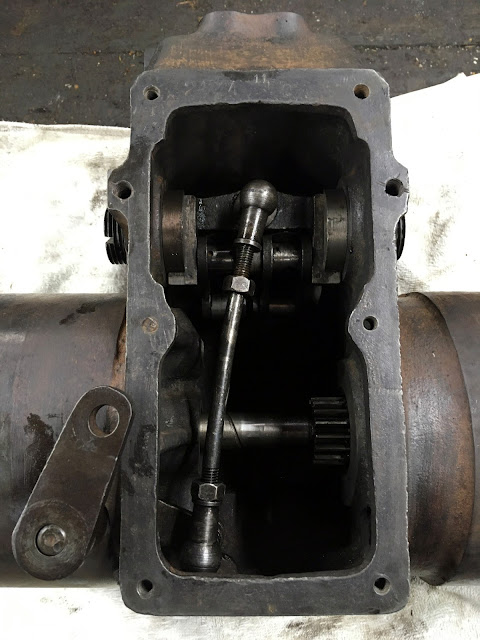 If you compare these photos with the sectional drawing in the 25 May 2019 blog it can be seen that while the same basic principles apply, the layout is completely different. We’ve also spent some time with our fingers in the pump of the only other MDB4 we are aware of, which is also owned by Armley Mills. While this has similarities to the MDB2 unit, there are several differences, not least in the way the position of the cam followers is adjusted.

A big headache is the gearing ratios. For some bizarre reason the gear ratios in the timing train seem to vary from engine to engine. As-yet we have not taken the cover off the MDB2 train, but the spare catalogue quotes numbers of teeth. The set for the MDB4 has a different number of teeth to the MDB2 catalogue and the number of teeth in the MDB2 fuel pump and the Armley Mills MDB4 fuel pump are different. None of the combinations of ratios gets the fuel pump in time with the engine, so something in our information, thinking or maths is wrong! If that is not enough in our minds the pump is operating on almost every stroke of the engine, not every other stroke, which does not make any sense. The ‘almost’ part is because the gear ratios never seem to come out a a whole number!

As well as the MDB2 Spares Catalogue, we also have another very useful book ‘Running Instructions, McLaren Oil Engines, Type MDB’. This refers to a later model of engine, fitted with a Bosch Fuel Injection Pump. One way out of our dilemma could be to fit a Bosch pump. The instructions are crystal clear, they say the pump ‘is fitted to the engine and driven by gearing at half engine speed’, which is in line with our thinking on how this should work. Why then do the gear ratios in the timing train not lead to a same speed or a half speed drive to the governor? Even considering fitting a standard component presents challenges.

All of this is a bit of a distraction, because what we really want to do (and are all set-up for) is making the pattern for the fuel pump body, but the prime purpose of the body is to hold all of the mechanism components in the right relative positions, so we have to know what is going inside it. Even though we do not have the absolute answer to the components, we’ve got enough of an idea to move on, so Will High has made a start on the drawings of the body.