Three views capturing some of the bits that have recently been grit blasted, which provide a flavour for activities later this year. 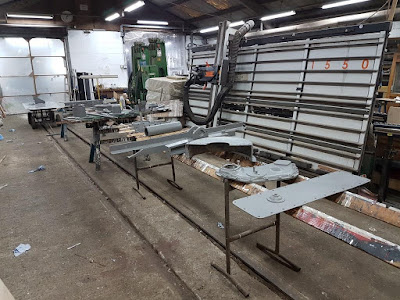 The big bits in the foreground of this image  include the (from right to left), the covers for the cam shaft/ valve push rods and the gear train from the MDB4 engine (see photo below), followed by the cover for the gear wheel on the lay shaft, which forms part of the final drive and the casting which carries the starting mechanism (see 8th March 2017 update) 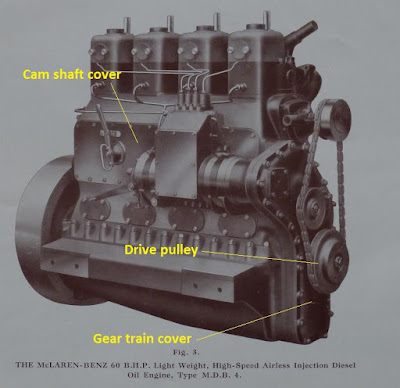 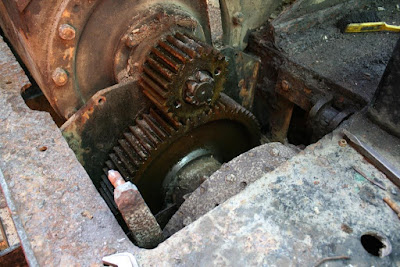 This is the final drive from the gear box to the lay shaft, which is protected by the cover in the centre of the first image. The ‘shadow’ of the cover can be seen. The upper strap of the transmission brake is also visible in this view. 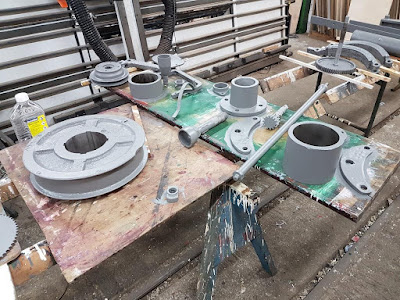 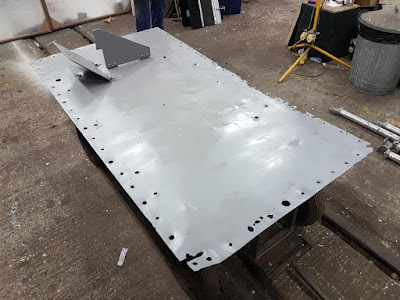 An easy one to spot. The cab rear sheet, complete with drivers’ seat.

A short and sweet report.

The picture of Rhys Hughes below says it all - the wheels for KS4415 are being turned and the journals skimmed... 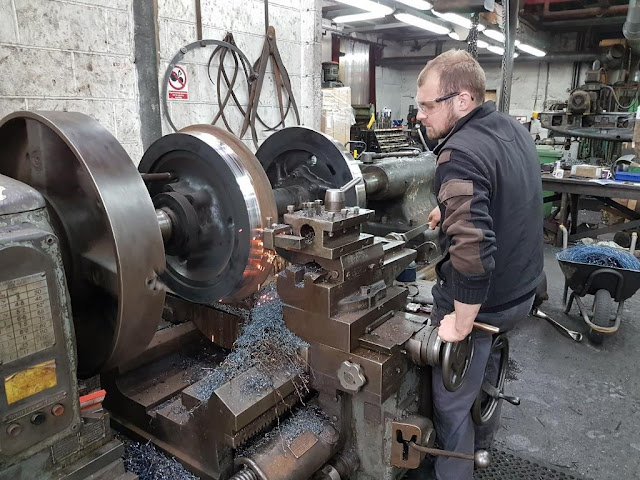 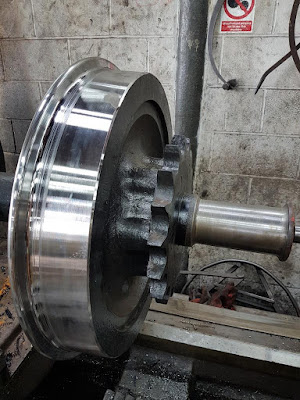 The frames turned over

After two years lying on their back, the frames have now been turned over and are now the right way up, so here are a few general views to place the various components into context. This photo from the rear of the loco shows the sub-frames in position, with the spring pockets bolted on and also the brackets for the brake gear fitted to the underside of the floor. The brake weigh shaft is to the left, under the cab floor and the angles which will carry the drag box can be seen behind the front buffer beam. Dave Hatt is about to put in a cameo appearance to rivet in the upper drag box angles. 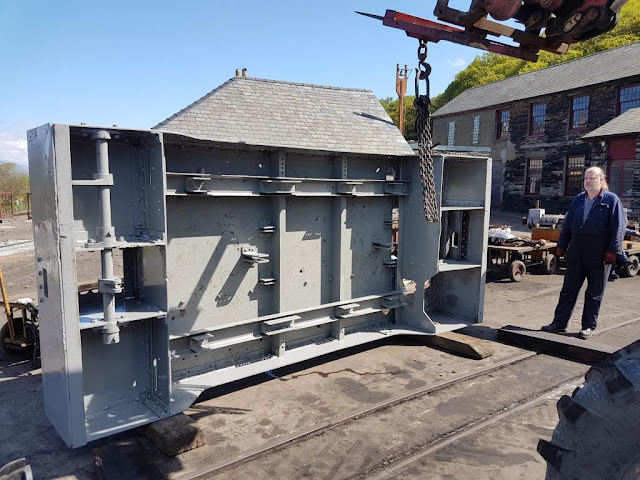 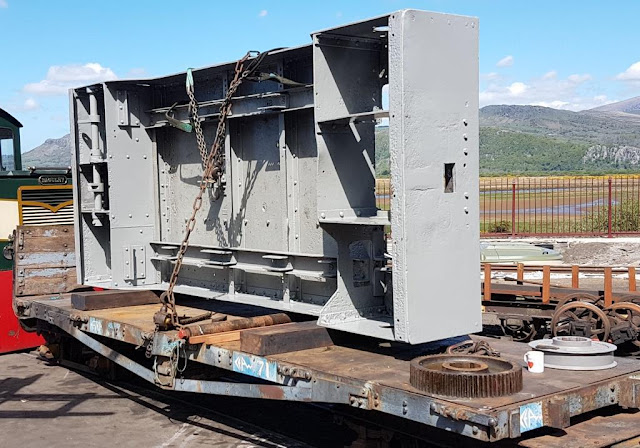 Frames right side up: 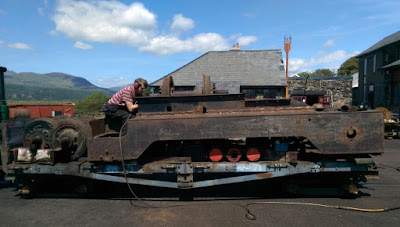 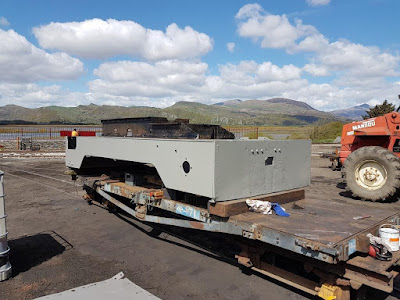 Contrasting views of the engine mounts before and after: 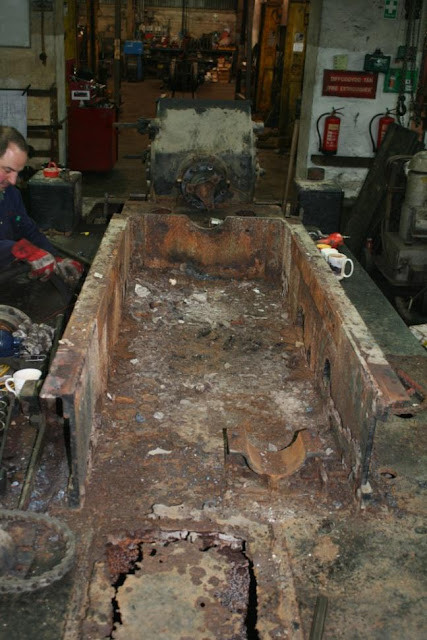 The semi-circular mount was for the dynamo. The heavily rusted cab floor plate was originally riveted in. The replacement will be fitted with set screws to allow access to the dragbox for maintenance. 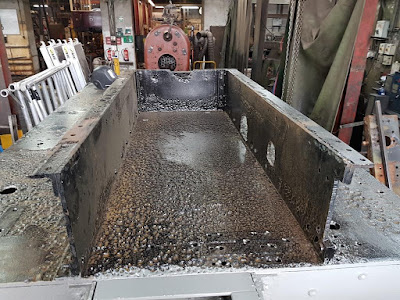 While the upper surface of the floor is heavily pitted, it is still fit for purpose and has been retained, in line with the conservation ethos of the project. 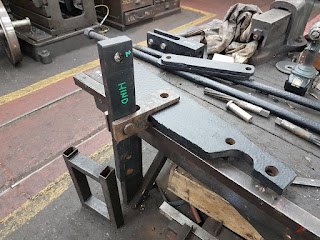 The rear assembly. This pivots from the frame via the top hole, with the pull rod acting on the bottom hole. The brake block bolts to the outer hole on the carrying arm while the inner hole is for a clevis to carry the suspension arm. The carrying arms are shaped to clear the flanges. 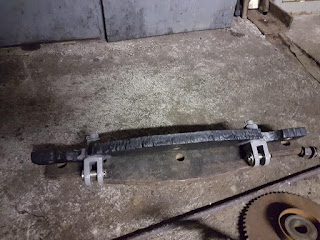 The carrying arms, fitted with clevises for the suspension arms. Note the rather crude flame cut finish. 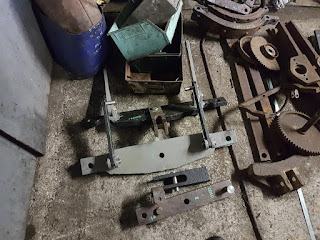 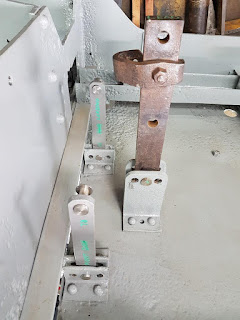 The suspension links fitted to the frames. This is the front unit. The bracket on the central link is for a release spring, which connects via a hook to the hole in frames. This spring pulls the brakes off the wheels when they are released.
Posted by David Tidy at 19:38 No comments:

The lack of recent news does not reflect a lack of recent progress. This report focuses on ‘new’ construction. KS4415 has never had a ‘drag box’ per se, merely couplings and buffers attached to the buffer beam. In early 1929,  KS4415 was fitted with chopper couplings to allow it to be used on passenger trains on the WHR. This is the period the restoration aims to represent. How the chopper couplings were fitted is unclear. Getting the coupling arrangement right is essential for the safe operation of the locomotive so we are shamelessly adopting current technology. To provide an idea about what we are currently fitting, here is ‘the answer’, in this case fitted to new FfR observation car 152.

The drawbar pivots in a crosshead. The crosshead is supported on two large bolts, with a series of rubber pads providing springing for both haulage and buffing loads. On KS4415 space to install this arrangement is limited, so rather than being fixed to a frame stretcher the dragbox assembly will be fixed to a strengthened buffer beam.